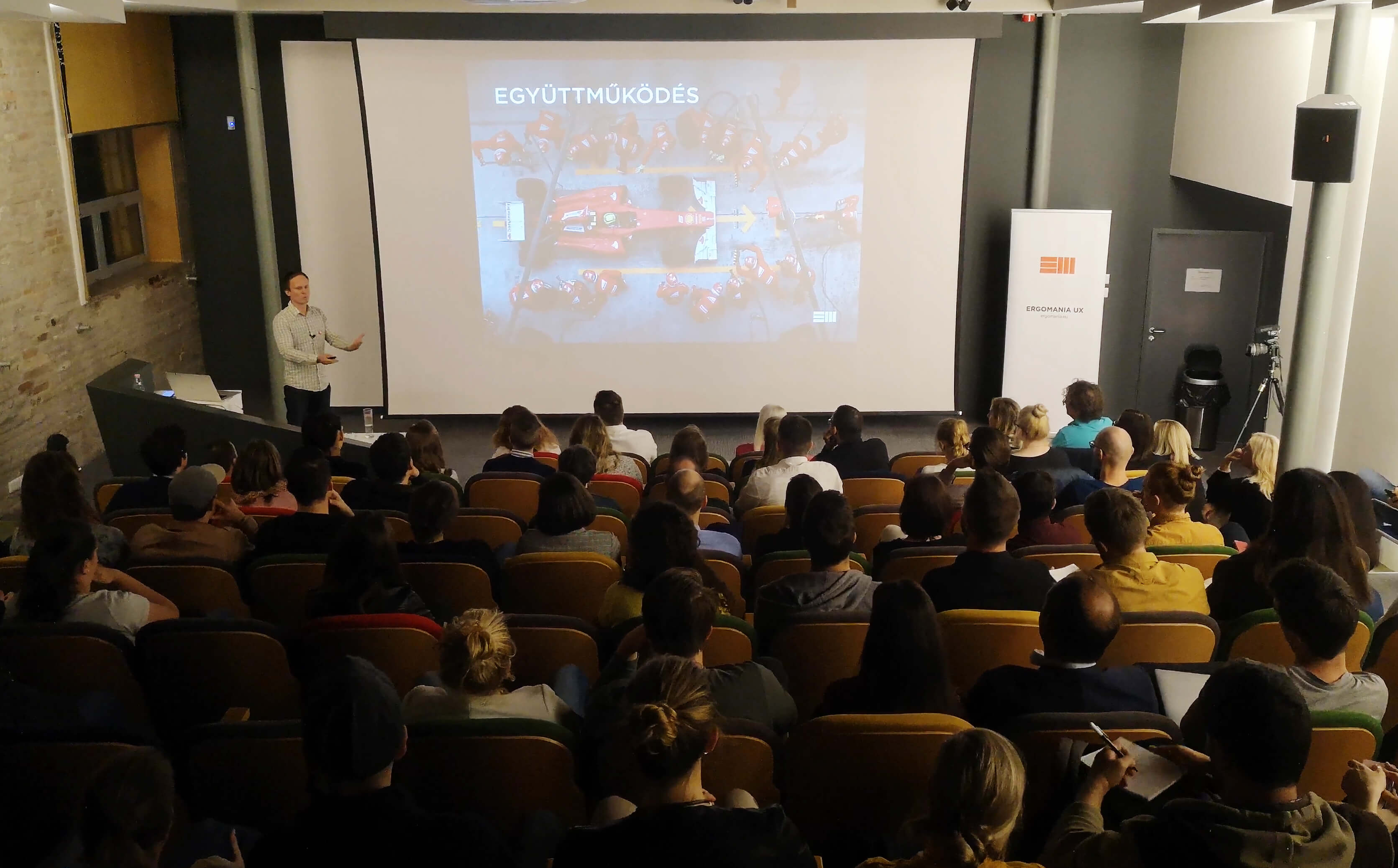 The term design system is one of the buzzwords lately, but do we know exactly what it means and would it really be the solution to anything and everything? Millenáris Startup Campus has hosted the second workshop of Ergomania’s Product Design Talks and judging by the almost full house that greeted the presenters, design systems really are hot commodities right now. The professional presenters talked about the characteristics of design frameworks and their place in modern product design and tried to shed some light on how new banks and neo-banks are so successful nowadays.

“Design system” is one of the buzzwords of the time: it is widely talked about, and more and more clients demand it, but only a few people know what it really is – stated Peter Serfőző, the design lead at Zwoelf in his opening statement, then, much to the amusement of the crowd, he handed the microphone to himself since he pulled double duty at the talks, as a presenter and as master of ceremony as well. Keeping the light manner of the event, he went on illustrating the concept of design system with a straightforward example: when we play with Lego, we spend most of our time with browsing for the needed brick in a stack of plastic pieces whereas sorting the pile beforehand by using some set of rules, the “product” (in Legospeak “the build”) is easy to create. (Of course, there is no guarantee that we will not step on an abandoned Lego cube at night, but that’s a completely different story.) So a design system is an extensive set of rules that we use to define the appearance of a digital product.

Who needs a design system?

The concept of design systems is not new: in some respects, Vitruvius had already defined such systems in his work in architecture, published in the first century BC. Christopher Alexander, a renowned architect and design theorist, defined architectural and urban problems in his 1977 book, Pattern Language. Of course, image manuals can also be considered as such – and they are very symbolic that they have been published since the very first day of their existence in ring binders, so that the individual elements can be exchanged and upgraded. Of course, these are all online now, but the basic principle is the same.

Brad Frost’s approach (summarized in his 2013 book Atomic Design) may be considered the basis of modern design frameworks. According to this, design has to be broken down to the simplest, “atomic” building blocks, which cannot be simplified further (for example, labels, buttons, inputs), thus forming molecules, organisms and finally templates. The latter, and of course, the content, will eventually be the page itself.

The question is, does everyone really need a design system? The farther apart the designers and the end users of the product work, and the more complex the organization and its product range are, the more likely such a system will prove to be useful. Big tech companies all have such frameworks virtually and can do a good job for companies currently moving their operation to online platforms.

Peter has brought an example of an earlier project where three designers worked in three different locations. It became obvious fairly early that the natural existing small differences due to such a setup easily add up in the final layout, having a rather negative effect on the overall picture. This situation was finally solved by the introduction of a new UI style guide.

Although it could take a lot of time and money to set up such a system, experience has shown that in the long run it is the cost effective method of design and development. Just take Lloyds Bank or Airbnb as an example – the latter spent seven months to create their own design system, but then showed a return on investment.

So what is the future of design? As we have now moved from pixelpoint design to design systems, artificial intelligence can take over some of the design tasks in the future. This may sound daunting, but it actually means that the designer can rather spend their time on something AIs can’t solve. Another possible path to the future is the customization or personalization of the user experience, meaning the interface will be adapted to the user’s preferences and the way they choose to use the given application.

Wonder bullet, but it does not cure everything

Later, Balázs Tárkány-Kovács, Ergomania’s UX lead took over the stage, talking about the advantages and disadvantages of using design systems. He stressed that a framework is not a sort of wonder drug or magic dust, it must be used sensibly. “No matter how good the tune is, in the end it is the orchestra who plays it” was the motto of his presentation underlined by an out-of-tune flute rendering of the motion picture Titanic’s epic soundtrack to the amusement of the audience.

You can watch the presentation here:

What is the secret of challenger banks?

Finally, Andras Rung, founder of Ergomania shared his thoughts on the new or challenger banks secret to success. Traditional banks like to emphasize the business benefits and features of their products, but it is becoming increasingly apparent that customers, especially the younger generation no longer need these features or need a lot more. Branch-based banking (you know, when one physically enter a bank) is slowly being forced into the background, and is being used for operations that require a lot of human interaction (such as loan applications), and traditional banks are also pushing for more and more digital services, but the market for personal accounts and banking is exceptionally crowded. Traditional banks are still not afraid of the newcomers, since their major income is not realized on personal accounts, but on loans and investments, but this situation can easily change in a heartbeat.

What is the secret to the success of neobanks?

Above all, focusing on the customer experience. Revolut, for example, spends 2.5% of its budget on product design, while Lloyds, one of the major players in the world of old banking, spends only 0.5% – and they are still among the most innovative regular banks in the world. In the Central European region this figure is 0.1% for more advanced financial institutions, but most banks either do not deal with it at all or have one or two external experts entrusted with such tasks, Andras said.

The flagship of neo-banks with its 6 million users, is clearly Revolut, so an expert used their application to demonstrate how it outperforms traditional banking solutions in user experience. First and foremost it is lightning fast to become a customer; all you need is your phone, and you can open an account in five minutes. The application itself is very easy to use. You immediately log in using biometric identification, you do not have to enter multiple passwords and enter verification codes sent in text messages. In addition, its notification system is very sophisticated; we are being notified on everything that matters, but the app doesn’t waste the user’s time with sending notifications about each mundane task that’s been handled behind the scenes. The same approach is reflected in the user interface; we can easily keep an eye on our finances, nothing is hidden under a third submenu, but we do not get too much information.

It is a commercially well thought model; with the member-get-member system the user base grows very quickly, the fees are very affordable and many services are provided for free. It is fairly obvious that Revolut is constantly researching and observing their customers’ banking and application–using habits, and the new features of the app are not decided at ad hoc board meetings,” Andras said. They are also brave; Revolut is showing the currency exchange rates in real time, for example, while traditional banks prefer to keep this piece of information to themselves. Last but not least, the app itself is spectacularly crafted, the quality of workmanship is outstanding, whereas this often leaves much to be desired in the mobile applications used by traditional banks.

Andras then gave a number of examples from around the world, demonstrating how many different approaches new banks can choose from.

According to Andras, it is primarily about rethinking the most basic elements of banking, tailoring them to the users’ actual needs. This is how they make their products more usable and attractive – everything else plays second fiddle to this. 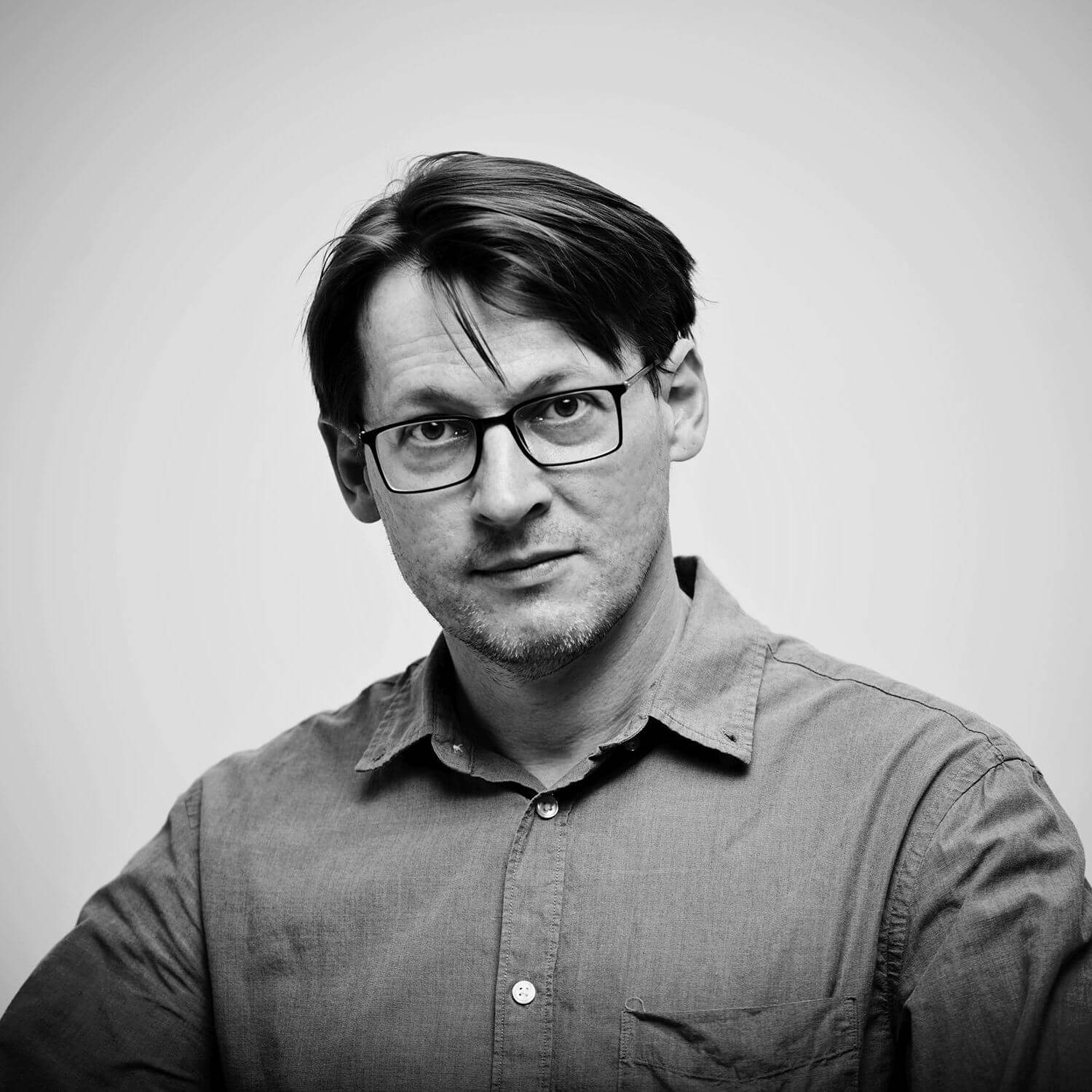 Balázs has spent the past 15 years at various agencies and digital products as an Information Architect, UX Designer, researcher, consultant, and usability expert. He specializes in UX writing, data visualization, and hard SF. He still buys CDs and loves coloured pencils. Balázs received an MA in Sociology from ELTE and an MA in Modern History at CEU.