The African fintech scene is growing at pace, with radical and innovative offerings that increasingly place the continent in the global mainstream.

Think of Africa. Big isn’t it? Thinking of Africa may bring to mind many stereotypes, depending on your own culture and age. Do you think of terrible conflicts, and the need for charitable intervention? Do you think of vibrant transformation and modernization?

About 16% of the world’s population lives in Africa, occupying 20% of the earth’s land area. That’s more than China, Canada and the USA put together. The African continent comprises 54 countries, with up to 3,000 languages in use. Yes, Africa is big.

Africa is also young, with 60% of the population under 25 years of age. Compare that with the European Union’s youth profile of just 20%. So when considering Africa, put aside the stereotypes, and think of youth driving transformation, enabled by business modernization which is rapidly merging the continent into the global mainstream. 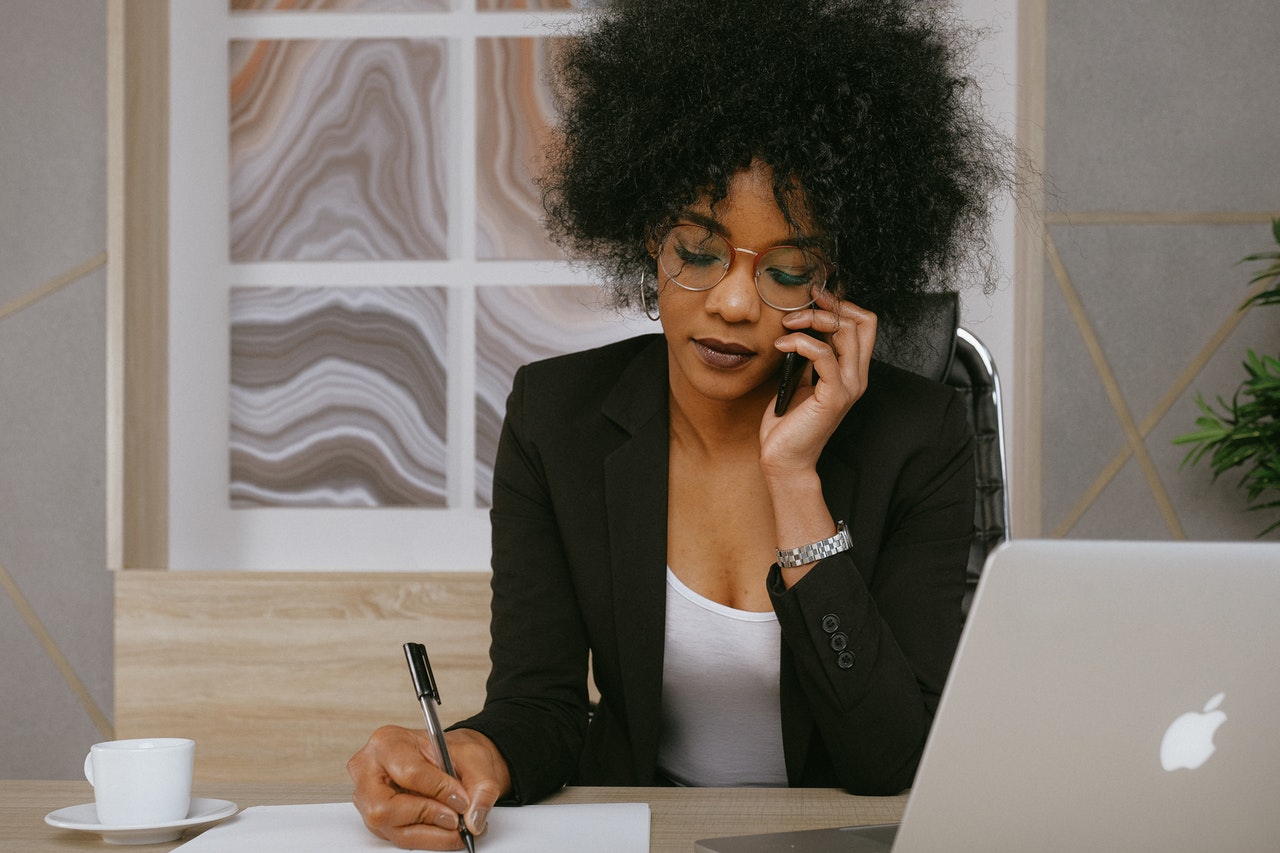 Helping the unwaged and unbanked

Young, increasingly affluent Africans are shaping demand for change in the life of the continent. In the technology and fintech fields this is particularly noticeable, because there were not massive institutions and vested interests to slow down development. Banking is a case in point, where in the past banks were only for the privileged few, and were inherently conservative. Banks did not want to service the requirements of a mass of unwaged people – that was more trouble than it was worth. And yet millions of Africans need banking functions: to receive their wages, send money to friends and family, and pay for services. Without a deeply-entrenched banking system, there have been huge leaps forward in African fintech, which the rest of the world could do well to learn from.

Smartphones – the tool of choice

Parallel to these developments has been the rollout of mobile telephone networks across Africa. In a vast landmass, conventional telephone infrastructure is expensive to install and maintain. In comparison, mobile telephony is easier to deploy, more accessible, and very attractive to users. So attractive, that over 50% of Africans have mobile telephones – equating to roughly double the number of handsets in use by Europeans.

The meeting of these vectors – a youthful and increasingly affluent population, innovations in banking, and reliable and widespread mobile networks – is producing a new wave of social and business change, right across the African continent.
Think of Africa: Big, isn’t it?

‘My phone is my bank’

With a rapidly growing population which increasingly needs financial tech services, the banks have engaged positively with new forms of mobile banking. A good example comes from the Democratic Republic of Congo (DRC), where Rawbank’s Illico Cash offers cardless transfers and withdrawals with the strapline, ‘My phone is my bank.’ Illico is French slang for ‘pronto’, or ‘sharpish’, indicating the instant nature of the service, and the fact that it is targeted on young, streetwise and tech-savvy users. Illico’s send-money-to-anyone feature is the most important, allowing waged people to support family members without bank accounts. Unbanked clients can also open an Illico cash account, so sending and receiving money fulfills an in-demand service across the DRC.

While Illico is an initiative from an established bank, in Kenya the M-Pesa service was launched in 2007 by Vodafone and its partner Safaricom. Pesa is ‘money’ in Swahili, so the name implies Mobile Money for the many millions of people who have limited or no access to banking services. There are currently around 30 million active users of M-Pesa across ten countries, which now include Albania, Romania, and India: the African model of sending and receiving money through a simple smartphone app is spreading.

As with Illico, M-Pesa also enables bill payment, and topping up phone airtime. Many of these services have taken off more quickly in Africa than elsewhere in the world. The inherent conservatism of European banks meant that for a long time there was resistance to doing things differently. It wasn’t until the advent of ‘Challenger Banks’ such as Monzo and N26 that the market started being shaken up. ‘Onboarding’ for example – new customers opening an account – used to be a complex process of visiting a bricks-and-mortar bank and filling in page after page of paperwork, then returning later with masses of paper-based validations. The Challenger Banks made onboarding a simple matter, using the facilities built into the customer’s smartphone – the camera, microphone, and keyboard.

M-Pesa, for example, only requires one visit to an agent – very often a local general store. The customer takes their phone (in which there is a Safaricom/Vodafone sim-card) and some form of approved ID. The user quickly receives a confirmation message and PIN to their phone, after which they input their details: Name, age, address, and preferred language. Within ten minutes they are able to send or receive money, with the agent acting as ‘banker’.

Taking a closer look at the M-Pesa screen on the user’s handset, a clear structure and categorisation in the main menu can be seen, with clean visualization and complementary labelling. This is a design which is serious about being user-friendly to the maximum number of people. 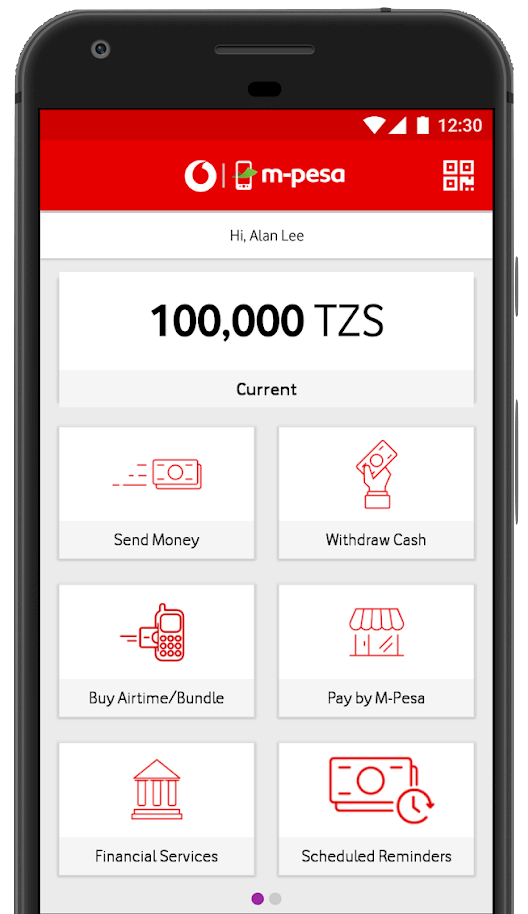 Transparency is always important for financial transactions, especially in consumer oriented products. M-Pesa provides detailed representation of information on the preview screen which appears before sending money, and all fees are shown. Even users who are not tech-savvy can quickly get up to speed and understand the system. There’s also easy access to the transaction history, which is not always available on more sophisticated money transaction platforms, where confidentiality of larger transactions is sometimes a higher priority. 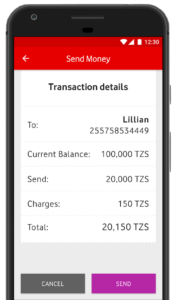 In addition there are QR facilities within M-Pesa, making it easy to scan codes to enable payment, further reducing the need for advanced user knowledge.
The app is of course predicated on being fast and easy to process and send money. Faster payment equals higher usage, which in turn increases business. Win-win, with the upshot being that consumer needs are met.
Taking M-Pesa as an example of good practice, it’s easy to see why the hybridization of mobile services and banking is developing so rapidly in Africa. It’s the right sort of offering, at the right time. 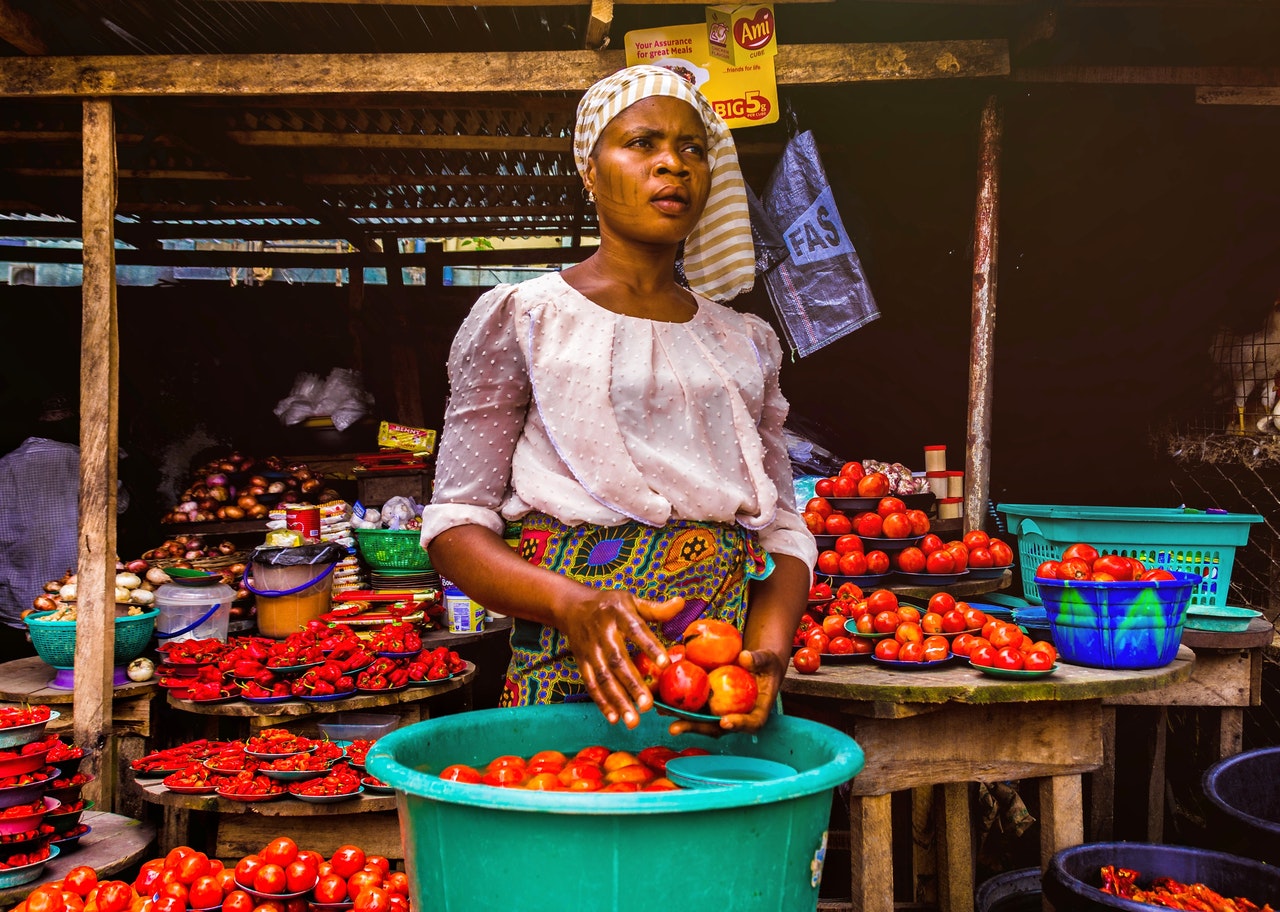 Such new technological approaches in Africa have been welcomed by consumers, and banks quickly seized on the benefits of simple hybrid phone/banking applications exemplified by Illico and M-Pesa. These include BGFIMobile in Gabon, Ecobank Mobile across many countries, and BCDC Mobile in the DRC. They all share similar intentions – to make acquisition of customers, and the transfer of funds easy, seamless and secure. But hang on, was the term simple app applied to this growing market? Like really? And exactly how simple?

Swahili, French and English are the main languages of sub-Saharan Africa, shading into Arabic the more north of the equator you go. Then there are those other 3,000-odd tribal and regional languages. Complexity comes baked-in to the African fintech experience, and yet usability is paramount. Urban tech-savvy younger people expect a seamless user experience, while older, often more rural people, need easy to understand operation. Digitalization has been coming at pace in every aspect of people’s lives, and very much so with financial tech. It’s also the area where security must be high, even when a user is new to a platform, or inexperienced in using their smartphone for money transfers. Digital cash, digital loans and electronic money services must therefore be designed to reflect the wide spread in users and languages, yet provide all with the services they need. 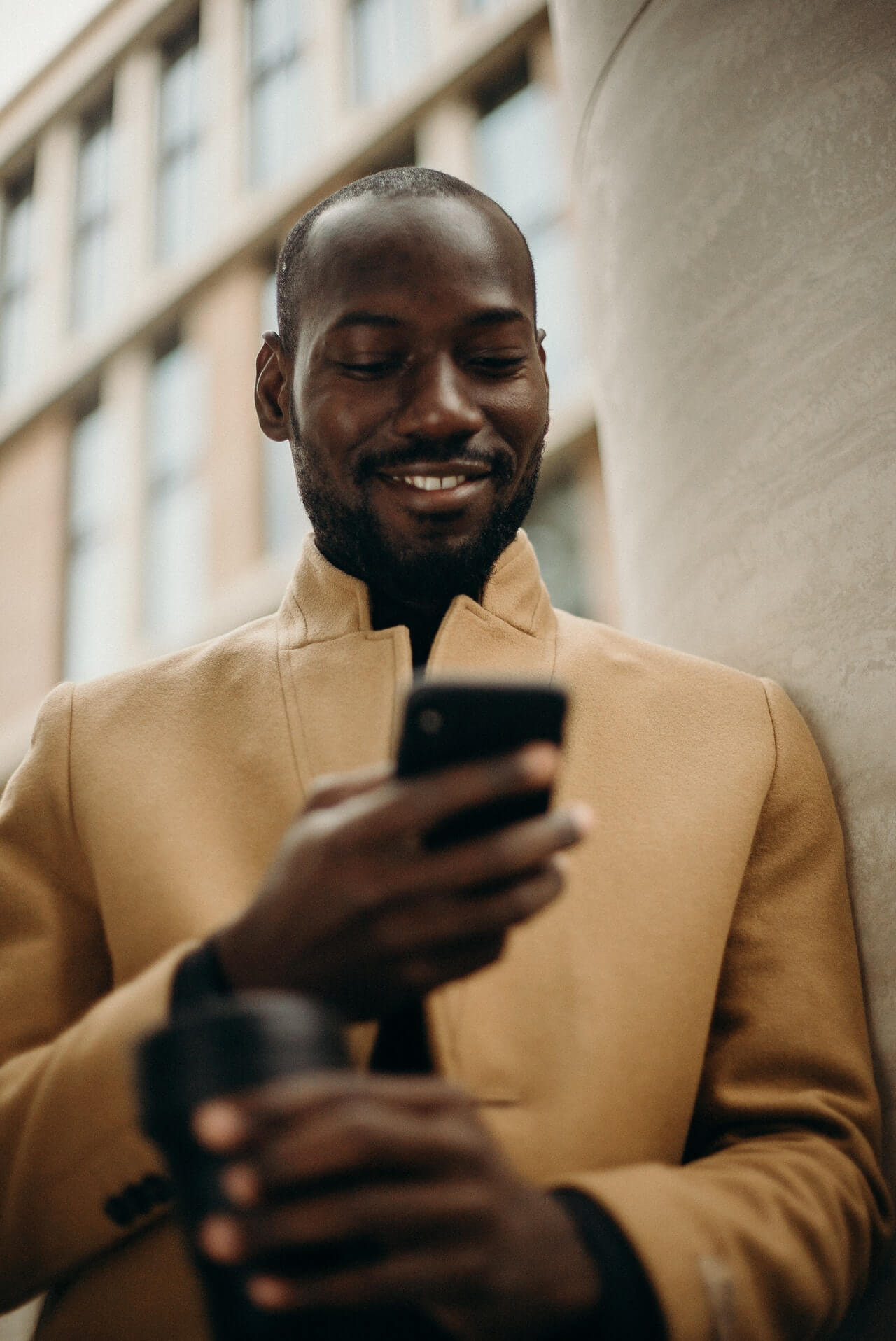 Bringing it all together

Fortunately there are agencies around that have definitive knowledge in this field. One such is the world-citizen, Hungary-based Ergomania, with twenty years of experience gathered from working on over two hundred UX-UI projects. That’s User Experience and User Interface, in case you’re not quite up to speed with the world of digital product design. Ergomania digital product design is a specialist in UX and UI for fintech applications, and has partnered with many European banks and network providers. Just check out the Ergomania website for the impressive list of major companies and institutions that Ergomania have applied their ‘common vocabulary’ approach to.

A great user experience is when we barely have to think about the processes which lie behind an activity. I want to turn on the lamp in my room, and have learned that by clicking a switch – my User Interface – the room will be flooded with light. I don’t worry about the details of power generation, or the lines which deliver electricity to my house, or the thousands of details which contribute to my simple need, and its fulfilment. And you know what? When someone else wants to switch off the lamp, they understand the same rules of operation, and achieve the same results! We both have a satisfying User Experience. And if I travel to another country, the chances are that I will soon be able to turn lamps on and off there too. That’s how good the worldwide electricity industry has become with their UX and UI!

Although that’s a simplistic explanation, applying it to the creation of mobile applications for the fintech market isn’t such a stretch. Banks, telecoms providers and customers for money transfer services are all looking for the same things: Ease of use, security, and the kind of intuitive understanding that is needed to switch on a lamp. So if fintech is that easy, why the need for companies like Ergomania?

If every bank and telecoms company produced in-house solutions for their fintech products, they might eventually come up with satisfactory UX-UI. Maybe. Like, give me time and I’ll design and engineer my own power station and electricity grid to switch on that lamp in my room. We go to experts for their expertise, and Ergomania definitely has that. The company has proven its credentials in fintech UX-UI design again and again, and knows its way around mobile wallet creation and innovative fintech solutions that satisfy all the client’s and user’s criteria.

Africa meanwhile is big (or did I already mention that?), and getting bigger in the global mainstream. The African Fintech Foundry, and events such as the Africa Fintech Festival are proof positive that steady traction is being gained in the financial and communications sector, as demonstrated by the rapid uptake of initiatives such as Illico and M-Pesa. Digitalization is coming fast to Africa, benefiting from a ‘clean slate’ approach where developments are not hampered by tradition. Add in the mass of tech-savvy and increasingly affluent young people, and whatever you might have thought of African Fintech before, think again.

Harlan Cockburn is a writer and director based in Budapest, Hungary.

I empathize with Maria Amidi Nouri in our mutual wish to be closer to the sea. I was raised on the coast of north east England, Maria in Tehran, a few hours drive from the world’s largest inland body ...